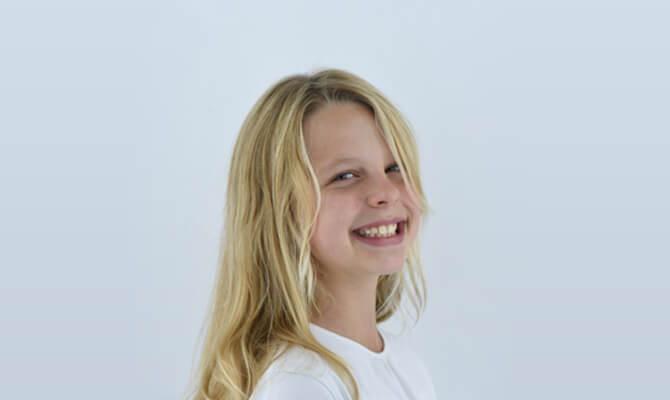 This treatment is needed when occlusion problems appear at an early age together with bad habits of children, such as sucking fingers or blankets, biting nails, etc. These problems must be solved at an early age.

In orthodontic treatment of children the following treatment methods can be employed:

The purpose of the orthodontic face mask is to stimulate growth of the upper plate. This device  is commonly matched with the palatal expander, which widens the upper jaw, pulling it forward and down.

How long do you have to wear orthodontic face mask?

It is recommended to keep it on for 12 to 14 hours a day (or more): 8 hours during sleep and the rest of the time during day. If used for less time, the appliance is ineffective and won‘t provide good results. Average active wear of the appliance is 6 to 12 months.

It might feel uncomfortable for the first 3 to 5 days. If pain is intense pain reducing, medications might be prescribed. Later on, teeth adapt to traction. if you decide to quit using the appliance because of the initial discomfort, the adjustment will be the same as at the beginning.

Can you eat while wearing the appliance?

It is recommended to remove the face mask before meal.

How to take care of your teeth?

The same way as you would do normally. Remove the appliance before brushing teeth.

The fast palatal expansion device is used for expansion of the upper jaw, when the jaw is narrow and the upper teeth are lacking space.

The purpose of the palatal band is to keep and expand the jaw. It can also be used to maintain the space in the teeth arch after milk-teeth prematurely fall out.

The device is fixed on the side teeth with special rings, expanding the upper teeth arch. Sometimes such devices are fixed on palatal micro-implants, mostly in elder patients. The device is used with children as well as teens, with only a slightly different modification.

Patients’ pictures during and after treatment:

How long does the expansion take?

The expansion takes about 2 to 3 weeks. Usually during expansion, gaps form between the upper central incisors.  After expansion is complete, the teeth migrate and the gap closes. After active expansion, the device stays in for another 6 to 8 months, until new bone forms in the expanded area.

At the beginning of expansion the sensation of pulling, and a slight pain of the palate, might occur. During expansion, a temporary gap between upper central incisors might form.

The palatal band is a thick wire band that stretches all through the palate and is fixed to rings on the upper molar teeth.

The device is not visible from outside and doesn‘t complicate oral hygiene procedures.

How does it work?

The device is used as a prophylactic space holder or as an additional anchor during orthodontic treatment.

Usually, the device doesn‘t create discomfort, though sometimes it might temporarily pinch or scrape the tongue.

If discomfort lasts more than a week contact your orthodontist.

What to do if the device breaks?

The tongue band is an orthodontic treatment device for children used to make space for permanent teeth in the lower jaw.

The device consists of a wire band that attaches to rings cemented onto permanent molar teeth.

The tongue band might be used as a prophylactic space holding device when milk teeth are prematurely lost.

The device is not visible from outside, is comfortable to wear and does not complicate oral hygiene procedures.

How long do you have to wear it?

The device is removed after all permanent teeth in the lower jaw come out.

Usually the device doesn‘t cause any discomfort.

What to do if the device breaks?

Because plates take a lot of space on the palate, this may cause the position of the tongue to change if they are worn for a long time period.  The tongue then takes a lower position causing various occlusion abnormalities, as for example – open occlusion. For this reason plates should not be worn longer than 6 to 12 months.

Example of plates being worn for too long:

In cases when treatment with plates is needed on a larger scale, we use irremovable devices that don‘t influence tongue function.

The tongue crib is a prophylactic treatment device used to correct the position and function of the tongue.

It mechanically closes the way for the tongue, preventing it from staying in between teeth. One of the common reasons for open occlusion is keeping the tongue between the teeth.

Patients‘ pictures before, during and after treatment:

Tongue crib doesn‘t change the function of the tongue. It is a „reminder“ for the patient to not put the tongue in between teeth. Patient is asked to do various physical therapy exercises that help to keep tongue in a right position during non-functioning time (the tip of the tongue has to prop against the part of the palate that is directly behind the upper front teeth) and during function time (swallowing, talking). If patient doesn’t change his habits open occlusion may recur after taking tongue crib off.

At the beginning of treatment tongue crib might cause lisp that lasts a week. If tongue crib broke or tipped against the palate – contact your orthodontist immediately.

The Loop appliance maintains space when teeth are lost prematurely.

An appliance is used when after removing a milk tooth when the permanent one is not expect to come out for at least 6 months.

If retention loop appliance is not placed on time when teeth migrate, the space for the permanent tooth in teeth arch is getting smaller with time. For that reason, it is important to place retention devices not later than a month after removal of the milk tooth. When the space for the permanent tooth already got smaller the appliances that help to open space up are used.

Gallery of Orthodontic treatment of Children.